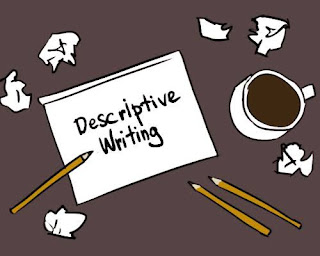 A.     Background
Descriptive text, or in terms of writing simply known as "description" is one English lessons to be mastered not only by the junior high school children, but also by the high school kids, students and anyone who loves the English language. Because after all, writing descriptive material is necessary for the development of English language proficiency us.
Some of the writers, particularly writers of fiction, has the ability to write descriptive text so well that writing is very readable at the same time easy to understand. Therefore, if we are able to master this lesson well, we might later be a great writer in the future.
Furthermore, explanations and examples of descriptive text could help my friend who is or is still a long way to learn English. Do not hesitate to read the descriptive text below, the more we read the more we can understand it. And it would be nice if we not only understand itself, but also can write their own descriptive text
B.      Formulation Of The Problem
1.      Understanding
2.      Purpose Descriptive Text
3.      Structure Text (Generic Structure)
4.      Characteristics Descriptive Text
5.      Sample Descriptive Text and explanation.
C.     Destination Problem
To complete the task and learn the meaning of a text description

A.     Understanding
Before looking What is the definition of descriptive text as a whole, let us understand what is meant by the word descriptive itself. Descriptive is an adjective that if we mean in Indonesian means that the description (picture). If you were asked to describe an object, it means you have to describe the object in question both in the size, color and so forth. According to Wikipedia, is a Descriptive text is: "one kaedah data processing effort into something that can be expressed clearly and precisely with the aim that can be understood by people who do not directly experience it for yourself." So what is meant by descriptive text is an article or text that describes the properties inherent in something, be it humans, animals, plants, or inanimate objects such as houses, cars and so forth.
B.     Purpose Descriptive Text
Judging from the above understanding, then in fact we are able to understand what is the purpose of descriptive text. Another goal is to describe everything be it human, animal, plant or inanimate objects with properties attached to it such as size, type, color, and so forth so that the reader or the reader can figure out what something is out of the picture we convey even though he has not never seen.
C.     Structure Text (Generic Structure)
Descriptive text has its own rules in writing, including in the structure or composition of which must be written in order. If you are prompted to create descriptive text, then make sure the structure is as follows:
1.      Identification: This section - in the first paragraph - the goal is to identify something to be described or depicted. Explanation easy, Identification serves to introduce the reader about the object or something that we have described before we tell about its properties. The goal is not to get one of those readers. We want to describe a car, for example, but the reader assumed motors. Example: you are asked to describe the new car, then the contents of his identification is: My dad just bought a new car. This car is long I craved, but only now my father bought. (Means to be portrayed is my car, not the car someone else).
2.      Description: This section - in the second paragraph and so on - contains the properties inherent in something that you already introduced to the reader in the first paragraph. Example (continued on cars above): This is my new car is the latest sports car from Toyota. Number bench only two, one for the driver and one for passengers, as well as the door. This car can be sped up to speeds of 500 km / h, almost equal to the speed of Fokker plane manifold.
D.    Characteristics Descriptive Text
These characteristics are important for you to take into account when writing the descriptive text is not wrong. So make sure you use the following features when using the genre will write descriptive text:
1.      Using the Simple Present Tense. Why use the simple present tense? this is because we will describe a fact or truth that is attached to something or someone. And one of the functions of the simple present is to illustrate a fact or truth (eg fact: the sun is hot). Therefore, you should always use the first form of the verb (verb-1). Your example will illustrate the properties of your new car: The color of my car is black, it can run up to 500 km / hour.
2.      Because of its function is to describe something by explaining its properties, then the text will be found many descriptive adjectives (adjective), as handsome, beautiful, tall, small, big, or if the adjective is derived from the verb, then you will find additional -ve, -ing, -nt in tow,
Example: Create (create)> creative (smart people make something).
Interest (interest)> interesting (something interesting)
3.      In the descriptive text we will often find Relating verb (copula) which is (as in characteristic number 1). In Indonesian is often interpreted as "is". Because the purpose or function descriptive text is to describe, then definitely we will often find the word was (is). His name is Andy (his name was Andy), his height is 160 cm (height is 160 cm).
E.     Sample Descriptive Text and explanation.
The National Monument
The National Monument (or Monument Nasional) is a 132 meters tower in the center of Merdeka Square, Central Jakarta. It symbolizes the fight for Indonesia’s independence. The monument consist of a 117,7 m obelisk on a 45 m square platform at a height of 17 m. The towering monument symbolizes the philosophy of Lingga and Yoni. Lingga resembles, rice pestle (alu) and Yoni resembles a mortar rice (lesung), two important items in Indonesian agricultural tradition. The construction began in 1961 under the direction of President Soekarno and the monument was opened to the public in 1975. It is topped by a flame covered with gold foil. The monument and museum is opened daily from 08.00 – 15.00 every day throughout the week, except for the last Monday of the month the monument is closed.
Prambanan Temple
Prambanan is the largest Hindu temple compound in Central Java in Indonesia, located approximately 18 km east of Yogyakarta. It is characterised by its tall and pointed architecture, typical of Hindu temple architecture, and by the 47 m high central building inside a large complex of individual temples. It was built around 850 CE by either Rakai Pikatan, king of the second Mataram Dynasty, or Balitung Maha Sambu, during the Sanjaya Dynasty. Not long after its construction, the temple was abandoned and began to deteriorate. Reconstruction of the compound began in 1918. The main building was completed in around 1953.

A.   Conclusion
Descriptive text is a text which says what a person or a thing is like. Its purpose is to describe and reveal a particular person, place or thing.
Structure Descriptive Text (generic structure) are:
1.      Identification (ID) is the introduction, in the form of a general overview of a topic.
2.      Description (description) is contain specific characteristics possessed objects, places, or people described.
Characteristics Descriptive Text:
1.      Using the simple present tense
2.      Using the verb attribute, such as Be (am, is, are)
3.      Just focus on one object.

Adoration writer prayed to Allah SWT for His grace and mercy is fast approaching so this paper can be resolved. In preparing this paper, the authors have tried as much as possible, which has been time-consuming and sacrifice priceless of all those who aid, which directly represent a positive incentive for authors when facing obstacles to gather resource materials for writing a paper this.
But realize that the authors of this paper are still very far from perfection, both in terms of the presentation of the material and in terms of language. Hence the advice and constructive criticism are always authors expect in order to complement and enhance this paper.
Share on Facebook
Share on Twitter
Share on Google+
Share on LinkedIn